Greetings human beings of all ages and sizes will come to our “Wonderful Reading Activity”! It is a slightly gratuitous name, I am aware, but I hope that it will help you grow in not only your reading but also in your grammatical skills and hopefully your enjoyment. Let’s start with the lesson and branch out into the activity and for this particular one you’ll need a couple of resources:

Ready to start. Let’s get into our lesson.

Let’s begin with a rundown of probably the most important grammatical structure in Bahasa Melayu: suffixes. Now there are many to be mentioned with a variety of purposes often many having several purposes even to the point of changing the original word to a completely new meaning. Instead of going specific in here, I’m going to give a basic rundown of several common ones with some examples in sentences and featuring our favorite example words: “masuk” (enter), “tinggi” (tall), and the ever-popular “ajar” (teach). Well also have a few other guest words so stick around for everything to come! Let’s begin!

Used for almost every verb and nearly universally used in every sentences, the basic job of prefix “me…” for example with the word “ajar” means (teach) “mengajar” meanwhile means (to teaching). It’s a subtle change but common nonetheless. Similarly, “masuk” (enter) becomes “memasuk” (to enter), and in a sentence both function as a normal verb (try saying these sentences aloud as you read them) :

Kami memasuk rumah sewa berkasut.
We are entering the rented house in our shoes.

Oh dear, it seems like the prefix “ber…” and “pe…” on “berkasut” (to have shoes on, “to be with shoes) and “pelajar” (student) have already snuck their way into the lesson. Let’s try a few more examples with “me…” before we get too far in with those….

Mindy menyapu teman selapas pesta.
Mindy is sweeping the park after the party.

Important notes are that while “masuk” and “ajar” were originally verbs, “sapu” (broom) and “dayung” (paddle) were originally nouns. So while not every noun can become a verb certain nouns when given the prefix “me…” can become verbs. Additionally notice that the spelling changes depending on the first letter of the word, which is a common occurrence among all suffixes.
Go to CHAPTER 18 and 19 to understand in full detail the rules and different spellings.

*An important note is that while this works for most verbs there are some like “pergi” (go) that never has the prefix “me…”.

This is another common prefix used for a few different a few of which being 1) to signify that someone has (is wearing or has an attribute) something, 2) to signal a verb is reflective (or done to the person’s self, not to another object) 3) if the action is action with someone else. There are others but I will give a few examples to demonstrate the ones above.

Kami memasuk rumah sewa berkasut.
We are entering the rented house in our shoes.

Mereka belajar tentang tatabahasa.
They are learning about grammar.

Bagimana kamu berhias seperti puteri?
How do you dress up (beautify) like a princess?

Mereka berjumpa di bawah pejabat.
They met under the office.

Note the different uses of “ber…” with “kasut” (shoes), “hias” (adorn/decorate), and “jumpa” (meet). Both nouns and verbs are used but in different ways depending on the context and “ajar” completely changes meaning with the prefix “ber…” from teaching and learning. Of course these are not all of the rules of prefix “ber…” either.

Go to CHAPTER 20 to understand in full detail the rules and different spellings.

This one is quite simple. This can denote the most of something like the highest, tallest, most beautiful, most ugly, things of that nature. It also can tell whether or not someone is able to do something. Here are two examples:

Telur di atas rak tertinggi dalam peti sejuk.
The eggs are on top of the highest shelf in the fridge.

Note that “tinggi” is an adjective so this prefix is the first that has a specific purpose for adjectives. Also, not that sentence above is in the negative as in “not able” and this is often how the prefix “ter…” is used. Very rarely will it be used outside of the negative context, though a few examples do exsist.
Go to CHAPTER 21 to understand in full detail the rules and different spellings.

This functions a little bit like the prefix ‘me…” though this time this suffix changes verbs so that they are acting upon something rather than on their own.

Selapas itu, memasukkan pulang dalam ketuhar.
After that, put the tray in the oven.

Mereka membukukan surat-surat dari Raja dalam buku.
They complied the letters from the king into a book.

So along with our two verbs “masuk” and “ajar” we have a noun “buku” (book) an adjective “tinggi” and an adverb “lambat” (late) all given a new meaning by “me…kan”.

Go to CHAPTER 22 to understand in full detail the rules and different spellings.

Now how can well put these well-earned grammar lessons to good use? Well, let’s look back at our resources. First, review the Malay for Everyone lessons mentioned above and get familiar with the structure of these suffixes. Also review the top 2000 words with the Learn Malay: Quick/Easy/Efficient: 2000 Key Vocabularies book as you may want to use those to refresh your memory before you begin reading.
Next look at Bahasa Melayu passages from either Putra Gunung Tahan or the Free Malaysia Today and get your highlighters out. We are going to hunt for some suffixes!

So this is a rough example from a newspaper article I found in Free Malaysia Today. I just went through and highlighted all the words with suffixes (even those I didn’t talk about on this page but that you can read about in Malay for Everyone) and designated them under a different color line (ideally I would have highlighted them all a different color). 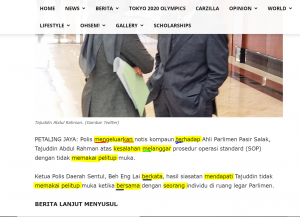 Now I have this particular article in English as well, but for now, let’s just focus on the sentences. What words can you make from the suffixes, do you understand them in context?

If you can make out a sentence write out what you think it’s basic English equivalent is remembering particularly what you think the modified word means in context. After you guess through your head knowledge also partially gleaned from the review with the Learn Malay: Quick/Easy/Efficient: 2000 Key Vocabularies try looking up the base word first if not already known (I recommend glosbe.com, but any good bi-lingual dictionary will do) and if known try first to imply meaning and then if you feel confident look it up or as an alternative to looking it up- ask a friend or mentor for the word meaning. Even better if you have the entered article also in English- try comparing your sentences to those in the English translation.

BE CAREFUL! Patterns can be deceiving, meanings could be very similar or not similar at all! That’s why it’s good to always double-check with a mentor or friend but this exercise can also be good for learning sentence structure as well as vocabulary aquistion.

*Just so you have some flexbility Putra Gunung Tahan and the Free Malaysia Today are interchangeable with other Bahasa Melayu reading resources. I just thought these were good as often Free Malaysia Today will have the same article translated in English and Bahasa Melayu which is great for comparing. Meanwhile, Putra Gunung Tahan has a higher level but a lot of good verbs, and being of a fiction medium has more engaging conversations in understandable language.