Arabic is currently the eighth most studied language in the United States. At the United Nations, Arabic is one of only two non-European languages with official status. So, why is it categorized as a “less commonly taught language?”

The interest in studying Arabic in the United States boomed after September 11th, 2001. It was no accident that this boom coincided with huge streams of federal funding dedicated to promoting its study among American citizens, especially via study abroad programs. For instance, during the 2000-2001 academic year, 890 students from U.S. institutions of higher education studied for academic credit in the Middle East and North Africa region. This jumped dramatically twelve years later with approximately 6,415 students from U.S. institutions of higher education studying in the region for academic credit 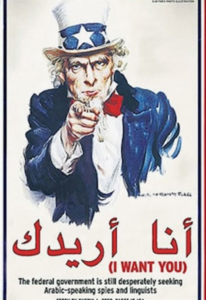 “I want you” from article Teaching Arabic in the US after 9/11, originally from Chicago-Sun Times

Geopolitics and Arabic Language Education: how are these shifts are felt in classrooms?

If you are a recipient of language funding from the U.S. Department of Education or other U.S. government funding to study in the Middle East and North Africa, your studies will inevitably be shaped by these streams of funding. Where are you studying and why? What themes is your program focusing on? What vocabulary are you learning? How is dialect being incorporated into your studies? These are all critical questions to ask wherever you are studying, but especially important if you have funding or institutional support that channels you to specific spaces and programs.

Feel free to share your experiences below and general thoughts on the shifting political economy of Arabic language education!

For further insight the relationship between geopolitics and Arabic: