Why dedicate a page to Gulf Arabic dialect?

As opposed to other dialects, such as Egyptian and Levantine, there are not many resources focused on learning dialects in the Gulf (a large area including UAE, Qatar, Bahrain, Saudi Arabia, Kuwait, (northern) Oman, parts of southern Iraq). However, many of the recently published beginning texts for Gulf Arabic are specifically created and designed to share “language items needed at major points of social contact between Gulf Arabs and Western residents….Teachers, engineers, businessmen,military personnel and others who need to be able to communicate…” (Holes 2014: ix). Unlike other dialects, many of these materials are not produced for  scholars or university classroom spaces. Instead, they are mostly created for self-instructed learners of a particular type: U.S. and Western European business men, diplomats and military personnel.

For this reason, this collection of resources for learning Gulf Arabic dialects is a work in progress. Thus far, these resources are generally focused on “Gulf” dialect, with some specific resources to Qatar, Saudi Arabia, and the UAE. This list also provides a brief summary of the resource and its target audience. Please feel free to comment on the page and point us to additional resources that might be relevant (for any level, from beginning to superior).

General Resources on “Arabic of the Gulf”

Originally published in 1984, the volume was updated and republished in 2010. The book can operate as a stand-alone text, and can also be purchased with accompanying CD packs. This text is in the genre of “Gulf Arabic for Western Business Men,” and assumes no knowledge of Arabic or the broader region. In fact, while the text teaches reading and writing in Arabic, it primarily depends on English transliteration, which could be useful for a beginner, but frustrating for an advanced learner. The book covers a range of topics, and incorporates lessons and exercises that draw attention to the built environment and visual cues in the region.

This website is also targeting the Western business person with zero familiarity with Arabic. The site works to reading and writing in arabic, eventually incorporating Arabic text in the site. It goes through the basics and then eventually builds to sections titled “Business Talk” and “Real Life Gulf Arabic.” The site gives you a little preview, but charges for full access to the resources. Most of the sources are from the UAE, with a few from Qatar.

Memrise includes a few courses on Gulf Arabic, including a few focused specifically on Saudi, Emirati and Kuwaiti dialect.

This page is a great resource, with over 625 phrases and words used in the Gulf, specifically Qatar, UAE, Kuwait, Bahrain, and Oman. This resource would be useful for advanced learners in MSA or another dialect, since it is an Arabic to Arabic dictionary.

This resource was created by a faculty member at Georgetown University in Qatar, meant to support Qatar residents to learn the local dialect. While there are few online resources and apps that focus on dialect, this is even more rare in the case of Gulf dialect (example, apps like Mango and Duolingo include Egyptian, Levantine, and even sometimes Iraqi dialect). This app provides a basic introduction to the dialect for a beginner or intermediate Arabic language learner.

Resources in Arabic for advanced learners

“Exotic (or “loan words”) words in Qatari dialect” by Noor Abdallah Al-Maliki is entirely in Arabic but a fascinating resource that focuses entirely on loan-words (or foreign words) in Qatari dialect, mostly coming from Farsi, English, French, Hindi, and Urdu. The introduction gives a fascinating introduction to the history of the dialect and the way it has been historically influenced by other languages (working against arguments made that Qatari dialect is closest to ‘pure’ Arabic). The book is categorized by type of vocabulary, spanning from furniture to clothing to education, and then shifting to phrases. The book was published in 2000, so definitely some of the usage of these words might have changed, particularly involving technologies such as computers and telephones, however, overall this is a rare and compelling resource for learning the dialect and engaging historically with it.

“Proverbs used by Qatar’s Bedouin and Urban population” by Khalifa bin al-Sayed Muhammed Saleh Al-Maliki, published in 2007. The book is entirely in Arabic with no explanation of the proverbs, but includes around 264 pages of them. For the advanced learner that is interested in proverbs and expressions, this is an invaluable resource. 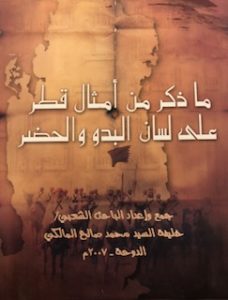 This Arabic to Arabic dictionary includes 173 word and phrase entries specifically used in Qatar. It includes an explanation of the use in a sentence. Additionally, the words are written out as they are spoken, in addition to the way they might be spelled. For example: وايد، واجد (the word is pronounced وايد but the ي sound comes from a ج).