Self-directed learning is as experimental as it is experiential. One of the best ways to design amazing mentor sessions is by asking your mentor for feedback during or after the lesson. However, another way to elicit feedback is to pick up on those things that aren’t necessarily spoken or emphasized, but which cause some confusion or strain during the lesson. Here are some examples from my learning. 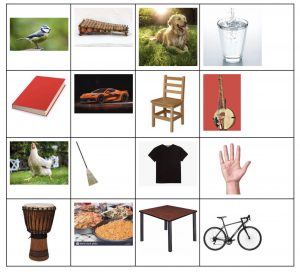 This is a picture of a lesson I designed to help me learn everyday vocabulary in the Dyula-speaking world. I also saw this as an opportunity to practice structures of location (e.g. to the left of, on top of…). When I asked to do this activity, my mentor was confused. First of all, in real life, certain objects as seen in this picture would not be seen on top of others (e.g. a broom would not be on top of the food). Second, living objects and inanimate objects take different structures to show its position to other objects. Even though the activity I proposed failed, I was still able to use it to learn meaningful information about the Manding language. As a result, I revised this table to reflect all living animals— more specifically, domestic animals that are most commonly bought and sold at the market.

Numbers have always been a frustration for me in other language, and especially in Dyula, they were part of the most challenging lesson. Why? The seller has to do a currency conversion by multiplying the given Dyula number by 5 in order to produce the correct amount of money in CFA. A factor by 5 is not difficult math, but I didn’t understand this at first because I had never heard of this rule before. This only became apparent to me when I realized that the lowest CFA bill is 500. To this end, when a seller tells you something costs “kemen fila” (200), they really mean it costs 1000 CFA (two bills). My mentor advised we create a table of conversion, and that I add a noun we have learned with each number to practice this conversion. Additionally, we would refer to this chart every lesson before doing a market role play. While I used to be somewhat afraid of numbers and currency, I now do these conversions quickly. What a great way to incorporate feedback! 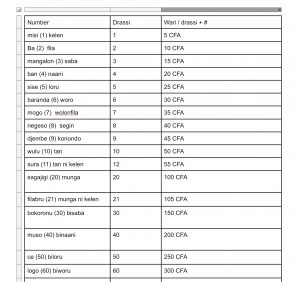