Chichewa (also known as Chewa and Nyanja) is the most widely spoken language in Malawi, with over half of the country’s 18 million people speaking Chichewa as their first language. Chichewa is also an official language of Zambia (where it is called Nyanja) and is spoken in parts of Mozambique and Zimbabwe. Although it may not be the first language of native Zambians or residents of Mozambique, the language has a wide geographic range. According to one Chichewa instructor, Chichewa is sometimes described not as a language but as a common skill or tool which enables people from different regions and tribes to communicate with each other – a lingua franca. In a region with high cultural and linguistic diversity, Chichewa is seen as a symbol of unity.  For this reason, understanding the strict grammar of Chichewa is less important than understanding the local context in which you will speak it!

Chichewa is a Bantu language, which originated with the Chewa tribe. Like other languages derived from the Bantu family, Chichewa is an agglutinating-inflectional language. In an agglutinating language we string together many different morphemes, or units of meaning, to form words. Many words in Chichewa are much longer than English words because they are formed from multiple small morphemes that cannot stand alone, but rather have to be bound to other morphemes to make sense. In an inflectional language, prefixes or suffixes are used to assign specific meanings to a morpheme (e.g. when a verb relates to a specific noun). Chichewa relies heavily on these affixes.

Historically, the Chewa people migrated into the Lake Malawi region from the lower Congo Basin in the mid-fifteenth century, and named the area “Malawi” for the “flames” from the setting sun that shone over the lake. Nyanja literally translates as “People of the Lake.” Today the Chewa are the largest ethnic group in Malawi, which explains why it is the predominate language throughout the country. The map below shows the regions where Chichewa is the major language, primarily in central and southern Malawi. 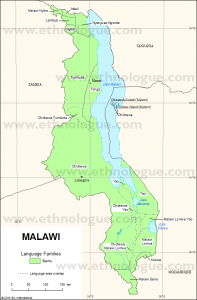