As a primarily English speaker and a new Amharic learner, incorporating the Amharic alphabet into your language learning and beginning to write in Fidel may seem daunting at first attempt.

The Amharic alphabet called Fidel, is a modern and adapted version of the Ge’ez script, which is still used today in the Ethiopian and Eritrean Orthodox Tewahedo Church. The Ethiopian fidel is classified as an abugida, meaning that each “letter” represents both a vowel and consonant sequence, not just a single letter. This makes sense as there are limited cases of finding a vowel written or spoken alone in Amharic (in shorter words) In Amharic there are 33 base characters plus a few additional variations, each of these characters has 7 different forms as they are paired with a different vowel.

With all of these characters and forms how can you best study the alphabet?!

2. Focus on 1 consonant at a time, as there are 7 variations of that one consonant. For efficiency, select a consonant that you have seen repeatedly in your Amharic practice. Write each consonant & vowel pair with it’s corresponding character in a list multiple times, then test yourself to see if you remember which letter goes with which consonant & vowel pair. Do this as many times as possible, then move onto the next consonant, then go back to the first consonant you practiced! 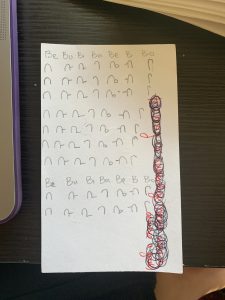 3. Select 3 Amharic words that require only 2 letters, this way you can practice putting 2 sounds together.

4. Continuously practice writing the corresponding character with a consonant & vowel pair, then work towards writing words. Starting with smaller word helps you get comfortable with individual sounds and it will be easier to remember these characters when working on larger words!

5. Find a book or website that has dialogues written in Fidel. Copy these dialogues for writing practice and additional comprehension practice.

Activity: Print the image below or try to free hand it. Trace each dotted letter, then try to trace out the whole word. There are two different fonts to practice with, solid/bubble letters or stick letters. Once you’ve traced all your letters and words, try to free hand write the words! 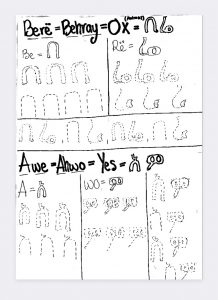 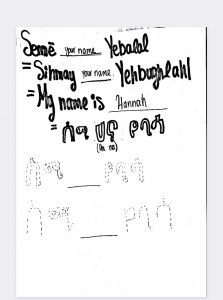