Luganda is a Bantu language spoken by Baganda (sing. Muganda) in the Buganda region of Uganda. Baganda make up the largest ethnic group in the country with a population of roughly five million people, and Luganda is the most widely spoken language in Uganda (5, Nannyonga-Tamusuza).

The Buganda region–situated on the Northwestern shore of Lake Victoria–was the site of one of the most powerful precolonial kingdoms in the Great Lakes Region. Today, Buganda remains politically important, as it includes Kampala, Uganda’s capital. Baganda enjoy a tropical climate year round as Buganda rests on the equator. 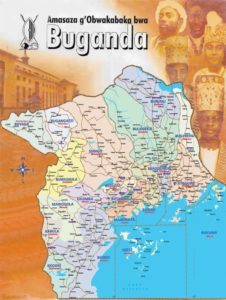 The staple food of the Baganda is matooke (bananas). Baganda usually have a Christian or Muslim name and a name given to them by their clan.

Buganda is roughly organized into 50 clans, each known for a particular skill and duty to be performed for the kabaka (king). For more information about history of the Luganda language and Baganda, click here.